Only One Week Away…Register Today!

Only One Week Away…Register Today!

published 11 Sep 2016 by in News category with 0 comments

By the time you read this, the London, Ontario 2016 Walk a Mile in Her Shoes® fundraiser/awareness raiser will be history as the Walk is next Sunday, September 18th with registration beginning at 11 a.m. and the actual Walk time being 12:30 p.m. We would love to have you join other courageous men who have registered - and are collecting pledges - to help raise awareness about the very serious issue of violence against women and to help Women's Community House reach their goal of $60,000. Recently, a seasoned Walker shared the following with WCH: “Are you man enough?” — I have heard this question many times in my life, sometimes by friends who egged me on to compete, and other times by strangers who wanted me to be reckless. But nothing had the same impact on me as the day when an advertisement on the side of an LTC bus asked me the same question.

I had moved to London in the summer of ’09 to attend Fanshawe College, and was using my new bus pass to cruise around town and get a feel for the city. At a certain point, there passed by us another bus, and the advertisement on it caught my attention. “Are you man enough?” the ad read, and before I could put it all together — the pair of red heels, Women’s Community House, and the Walk a Mile in Her Shoes® — the bus moved on. This piqued my interest, and left a lingering curiosity as to what it was all about. Having spent time in a women’s shelter when I was younger with my siblings and mother, and understanding what my aunt had survived, I knew that Women’s Community House was an integral part of the community. At the time, however, I thought that a bunch of guys walking in red heels around town was very silly, and not entirely productive in stopping domestic violence. Even though I was not versed in these issues, it did get me thinking and researching the problems surrounding domestic violence. And having known my aunt was a survivor of domestic violence, it helped me understand how and why women like my aunt remained victims for so long, and what I could do to help to prevent it within the community. Fast forward a few years to July 2013 when I came across the same ad — “Are you man enough?” — that I had in my first year of college. I had abandoned any thoughts regarding the Walk a Mile but, with seeing this ad again, I knew I had to get involved. 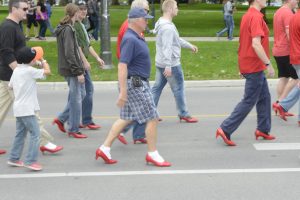 Having now participated in the Walk for four years in a row, I still get asked the question of why I do it. A lot of people think it’s because of my aunt, and to an extent they are right, but there’s more to it. First of all, it’s an extremely fun event, and all the organizers and fellow Walkers are great to work with and are a great support to have around. But mostly, besides raising donations for the event to support Women’s Community House, it’s because I want to spread public awareness about domestic violence, I want to take a stand towards ending the stigma surrounding it and I want to be part of moving our community towards ending violence against women. I want to be an example for others, to show that it is alright to talk openly and publicly about this issue — that it doesn’t have to be a taboo topic. Come Walk with me on Sunday, September 18th. Together, we can make a difference! Register today at www.walkamilelondon.ca. - submitted by Michael Knight, seasoned Walk a Mile in Her Shoes® Walker